From Web to Semantic Web - the 'Missing Link' 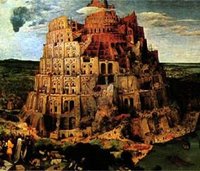 Starting with WebMonday's keynote in September the topic seems to get more attention every day (see also the discussion Markus Trapp's blog entries on Semantic Web and Web 2.0...). Web 2.0 almost seems to have reached the top in Gartner's hype cycle, and for sure you will have noticed that purchasing Web 2.0 companies has become rather expensive. Are we chasing a new bubble? But, that's another question that I won't discuss today.
I want to emphasize the thesis that for becoming a success 'Semantic Web' depends on 'Web 2.0 paradigms'.
Just follow this simple train of thoughts:

Thus, depending on the assumption that (a) there are alredy sound ontologies available and (b) there are tools for collaborative annotation, the annotation of billions of already existing web pages seems viable.

Last night at the opera...

On Sunday, we spent an diverting evening at the opera...well not exactly...we visited the 'Deutsches Nationaltheater Weimar' (DNT), where they performed 'Il Capella di paglia de Firenze' (The Italian Straw Hat), an opera from Nino Rota, a famous Italian composer, particularly remembered for his work on film scores, esp. 'The Godfather' series and a number of films by Federico Fellini. The story of the opera could be right out of a Marx Brothers movie: Not only that Fadinard's coach horse had just nibbled the Italian straw hat of a totaly unknown lady, no...it also happens to be just on his own wedding day. The wedding guests are just assembling for the wedding ceremony, while the groom brings a total stranger into his house, who insists on getting her hat replaced immediately! What about Mr. Fadinard's bride, Helene....and what about his father-in-law, who seems to be eager to cancel the affiance....Fadinard is hunting for a straw hat replacement with the whole wedding guests close on his heels...and it comes to a total confusion...
The opera debuted in 1955 - and it was rather obvious for me that Rota was also responsible for a lot of film scores, although there were many citations of Rossini, Verdi, and Puccini. All in all it was great fun - almost a slapstick comedy - although the actors could have acted a little bit more briskly. As usual, the 'Staatskapelle Weimar' this time with their conductor Marco Comin (I haven't seen him before...) did a great job and especially I want to highlight the choir (I really loved the two nuns...esp. the one with the pocket flask). BTW....the libretto (which is based on a play of the 19th century French author Eugène Labiche) of the opera was also subject of an old German movie of 1939 ('Der Florentiner Hut') with Heinz Rühmann.
Alas....if you want to spent an entertaining night at the opera and you do like also film scores as well as Rossini and Puccini, then try the 'Florentiner Hut'... :-)
Gepostet von Biblionomicon an 6:59 PM Links zu diesem Post

Searching Multimedia at the ETH Zürich

On Wednesday, I was invited to give a presentation about 'Efficient Search in Multimedia Presentations based on Automated and Collaborative Annotation' at the ETH Zürich. We - Jörg Waitelonis and myself - have been invited by Olaf Schulte (Leiter Video Services at the ETH) to present our solution of lecture recording (at the FSU Jena) and of course the possibility to make the content of the recorded video lectures accessible via content based search - with as little human interaction (i.e. manual annotation of video data, etc.) as possible. Just right before we started with our presentation, we realized some problems with the real player interface that occured when synchronizing different video streams not from the start, but from the point in time that is returned as a search result (we're working on it...). Right now, our lecture recording system records the video signal with the lecturer and the desktop being presented by the lecturer as two separate video streams that have to be synchronized for replay (with SMIL). If both streams are transferred via internet, sometimes we have realized serious synchronization problems...Maybe we should put both streams together (including a table ofcontents for in-video navigation) into a single Mpeg4 container...we'll see.
When it came to the point that recorded video lectures should be archived for a long term period, the argument was about which video format to choose (...with real media not being on the favourite side).
Zürich is a rather nice place...but also really expensive. We had a room in a rather nice hotel (designhotel plattenhof) nearby the ETH including 'designer lamps', 'designer furniture', and 'designer bathroom'. Thus, I almost amalgamated with my surrounding by wearing my 'desinger stubble' :-). Travelling to Zürich by train is somehow stressful...simply because of the 7-8 hours you need to get ther from Jena (Weimar).
Gepostet von Biblionomicon an 6:11 PM Links zu diesem Post

Why is the semester break always so short...?? Okay, we almost had 3 months of 'vacation' (our so called 'vacation' means 'time for REAL work, i.e. doing research, writing papers, visiting other researchers, attending conferences and workshops, writing applications for research grants, trying to cover up new research cooperations, etc...). This semester, I will give a lecture on 'Semantic Web'. So, this time lecturing will be great fun, because of the close connection to one of my most important research topic. As usual all lectures will be recorded and annotated (for content based search). You may participate via live streaming (Mondays, 12.15pm - 1.45pm) or have a look into the video archive. I'm looking forward to meeting about 15 students, who have already signed up for attending the lecture. The lecture will cover the following subjects:
Heiko Peter will supervise the lab courses and -- if we are lucky -- there will be some of the students who will take over a thesis (Studienarbeit / Diplomarbeit) related to Semantic Web technologies.
Gepostet von Biblionomicon an 1:32 PM Links zu diesem Post

...and now for something completely different

We are the hollow men
We are the stuffed men
Leaning together
Headpiece filled with straw. Alas!
Our dried voices, when
We whisper together
Are quiet and meaningless
As wind in dry grass
Or rats' feet over broken glass
In our dry cellar

Those who have crossed
With direct eyes, to death's other Kingdom
Remember us -- if at all -- not as lost
Violent souls, but only
As the hollow men
The stuffed men.
...
(This is only the first verse. The rest of the poem (verse 2 -- 5) you may find here...

On Friday, October 6th, Abebooks was inviting for a panel discussion on library 2.0 ("Revolution im Karteikasten: Bibliotheken & Web 2.0") at the Frankfurt Book Fair 2006. My part in the panel -- as being the "Web 2.0 Experte"...at least this was written on my badge :) -- was to explain (of cource not too technically...) web 2.0 technology. The other members of the panel were Marcus Polke, executive manager of Abebooks Europe, Tim Spalding, Founder of Librarything, my dear colleague and friend Steffen Büffel from the University of Trier (together we already moderated a workshop on library 2.0 at the InetBib in Münster), and Dr. Holger Schmidt, editor of FAZ, who anchored the panel.
Despite of our topic a "real" librarian was missing in the panel, but at least there was a number of librarians in the audience, as we realized in the discussion later on. The result of our discussion was quite obviuos...as expected, everybody welcomed the opportunities that web 2.0 offers for the library business, esp. the possibility of connecting collaborative tagging systems with library online catalogues via openURL. Thus, books can be tagged by the community of all users/readers (not only by users of the local library) and the tagging information (meta data) can be used for improving search capabilities within the local library.

Another account and nice pictures of the panel discussion can be found here: