I really enjoyed being there in Trento. The topics were mainly on ontology engineering and I was presenting a paper on NP-BibSearch, an ontology based bibliographic Search engine focussed on research papers related to NP-complete problems (here's a link to "NPBibSearch: An Ontology Augmented Bibliographic Search")
Gepostet von Biblionomicon an 6:15 PM

According to greek mythology, Zeus ordered the other gods to create Pandora as a poisoned gift for man. The intention was to punish Prometheus and mankind for betraying the secret of making fire. Prometheus was chained at a rock in the Kaukasus etc... while Pandora was sent to earth. Epimetheus (the brother of Prometheus) fell in love with her, but was told never to open the box, which was given her as a dowry. Until then, mankind had lived a life in a paradise without worry. Epimetheus told Pandora never to open the box she had received from Zeus. However, one day, Pandora's curiosity got the better of her and she opened it, releasing all the misfortunes of mankind. Once opened, she shut it in time to keep one thing in the box: hope...

As a derivative of the Music Genome Project an new music discovery service called Pandora started this week. You enter your favourite songs or artists and Pandora will make suggestions what to listen to. Furthermore, you can tell Pandora if you like its suggestions or not. You can create your own music radio stations and share it with friends. Also, Pandora tells you why it has selected a song it suggests.
Of course Pandora is not created on pure philantropy. The first ten hours of listening are free...and after you have become addicted you have the possibility to subscribe. Personally, I like the general idea of creating your own music radio station to listen to, but the question is, am I willing to pay for it? I don't know..... but I would like to have all the meta data :-)
Gepostet von Biblionomicon an 10:26 AM 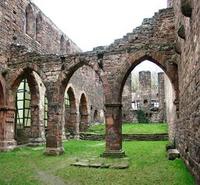 "Self Organization of Computing and Information Systems" was the topic of yesterdays meeting at Stadtroda (about 20 km east of Jena). The faculties of computer science at the FSU Jena discussed the new focal point of research: "Self-Organization".... and of course we have organised ourselves...

Much of our enthusiasm and of our effort went into the discussion about the definition of the term "Self-Organization", but the result was not really satisfying...Take 4 computer scientists and give them a topic to define...and you will end up in at least 5 different disjoint definitions. So what does the term mean...at least to me?
I would agree to the following (minimal) definition:
ok.... next thing to do is to think of how can I connect semantic web with self-organization...?
Autonomous agents independently fulfilling (higher order) tasks while adapting themselves using semantic description of their environment / using semantics to combine independent and unconnected services / ...
Gepostet von Biblionomicon an 9:54 AM 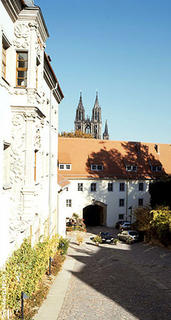 On Monday I had to give talk at the symposium "New Media and Civil Law" for judges in Meißen (Saxony) about internet technology and its economic background. Meißen is well known for having the first european porcelain-factory, the Staatliche Porzellan-Manufaktur Meißen, which is still existing today. The city has a beautifully preserved mediaeval and renaissance historic city center, a gothic cathedral (you can see its twin towers on the left) and with lots of little shops selling antiquities (esp. porcelain of course) and other oddities.

One interesting thing that I've learned at the symposium was that google and wikipedia already seem to be a firm part in the process of jurisdiction and legal practice...someday, highly paid experts and referees - as they are necessary today - might be looking for a new job...
Weird vision...winning or loosing a law suit because of some results achieved by a search engine (lucky for those, having a top page-rank)...google is more powerful than I imagined...
Gepostet von Biblionomicon an 12:10 PM

1832...to be precisely, March, 22. 1832.
In Weimar (Germany, dukedom of Saxony-Weimar-Eisenach), Johann Wolfgang von Goethe, writer, poet, savant, philosopher, humanist, and statesman, faces his last hours here on earth. When finaly taking his last breath, as legend has it, after an incredibly productive span of life he speakes the famous last words: "..... more light!" ("...mehr Licht!"<- in german). For more than a century scientists were debating about the meaning of these words (..or if they have been spoken at all). Did Goethe want to have the window shutters opened to have more light in the room..... or was he referring to some more philosophical topic in a metaphoric way, meaning to bring more light into the darkness of his (or better our collective) wisdom. Some are even joking that - as Goethe was hessian by birth - he started to say some sentence in hessian dialect, meaning as much as "one is lying in a very uncomfortable way here" ("Mer licht hier so schlecht"<-in hessian).

Ambiguity is a property of human language. Together with a lack of reference, sometimes it is impossible to derive (or even to guess) the meaning of words. One of the topics I'm dealing with ist semantic annotation of information. The transition from the world wide web of today to the semantic web of the near future will be one of the most important steps in technology....maybe with unimagined effects and unforseen side-effects. Therefore, the name of this Blog was chosen .... to bring "more light" into the information universe of the www.

....and of course to talk about life, the universe, and everything that matters....
Gepostet von Biblionomicon an 1:47 PM