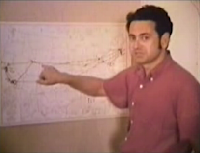 While doing some research on internet history for writing the 2nd edition of my WWW book, I found an impressive film that is gathering a lot of the most important internet pioneers. The documentary is entitled "Computer Networks: The Heralds of Resource Sharing" and was produced back in 1972 (!!!) by Steven King from MIT. It features the ARPANET and many of the most important names in the history of computer networking.
You will see J.C.R. Licklider, former director of the IPTO at ARPA, who was the first to envision a global internet. Also Larry Roberts (also former director of IPTO), Robert Kahn (co-inventor of the TCP/IP protocol and winner of the Turing Award), or Donald Davies (co-inventor of packet switching) are giving contributions.
It's really a 'must see', simply because all I already knew about internet history had come from books. I also only knew a few pictures showing early internet hardware or some mug-shots of the mentioned scientists. It's really interesting to see them in the film and to hear them talking about their great vision of internet computing as it has become reality today.....30 years after the film was produced...
Gepostet von Biblionomicon an 12:05 PM Links zu diesem Post

Finally, another year after reading 'The Da Vinci Code

', I decided to give its predecessor - Angels and Demons.

- a try. Ok, I really liked the 'Schnitzeljagd' (scavenger hunt) of connecting seemingly unconnected facts into wild conspiracy theories as it was presented by Dan Brown it 'The da Vinci Code'...although I was disappointed by its ending. But, as most times, it's hard to put an end to a story that is trapped in an apparently ever lasting climax. Thus, I thought, maybe the predecessor would be a little bit more well balanced.
Anyway, I had high expectations.....
So...you've heard about the Illuminati? Yes, I know. Ever since Robert A. Wilson's Illuminatus Trilogy

, the Illuminati have been subject to incredible conspiracy theories. This enlightenment secret society of freethinkers, most times connected to their Bavarian section founded by Adam Weishaupt back in the 18th century, where illustrious men like Goethe have been reputed members. A lot of connections have been tried to make to Freemasons or Rosicrucians, and because of their general close connection to the movement of enlightenment -- including their opposition to the church and christian faith -- as well as for being a secret society (the government always is afraid of conspiracies) they have been banned. But, there is a lot of conspiracy literature -- reputable as well as pure fiction -- where you can read all about.
I've read Wilson's Illuminatus more than 20 years ago. As being a teenager by that time, I was really fascinated that there should be a (entire different) world out there that only opens up for those who are enlighted. Everybody else was only able to see the surface and only a happy few were able to look behind the things of daily life ... although the traces were so obvious.
So, the concept of 'Angel and Demons' was not so new to me. Dan Brown tries to draw connections between modern particle physics (the plot starts with a murder taking place at CERN) and its destructive potential (antimatter and its disastrous effects), the ancient conflict between christian faith and natural science (a.k.a. the Vatican gang against the enlightened conspirers), and the moral values of faith and christianity at all. The story is driving an accelerating pace within this conflict, and a Harvard professor of semiotics together with a female (...and rather sexy) CERN scientist trying to solve the conspiracy puzzle that is threatening the Catholic church in its very foundations. For sure this scavenger hunt is rather exciting and thrilling, but also somehow frustrating.
But for me, the end (this time I won't spoil) was reconciling again (at least a little bit, although not everything was explained, as e.g. the provenance and the story of the assassin). But we learn, that there is nothing miraculous about and we don't have to be afraid of world threatening conspiracies.
Ok...I guess you have to read it by your own. It's really entertaining...and you will have a lot places to see, when you are visiting Rome and the Vatican the next time.
Before I forget, you should really read the original English version. The German translation

(I've read a few pages) is rather bad. I mean, it's well translated, but the language is rather shallow. Maybe it's the same with he English version...but for being a foreign speaker, maybe I don't realize. At least it was pretty simple to read and not difficult at all.
Gepostet von Biblionomicon an 10:36 AM Links zu diesem Post

This year, we participated at the LEARNTEC Fair in Karlsruhe (February 13-15). LEARNTEC is focussed of e-learning technology integrating universities and industries together within an exhibition and a congress. As officially being the advisor of an ESF/BMBF funded startup company called OSOTIS, I was visiting my students who took part at this exhibition. OSOTIS is also the name of the 'Academic Video Search Engine' that serves as a testbed for our research in semantic web and multimedia search technology.

The setting of OSOTIS is the following: We are dealing with lecture recordings and offer a search service over and also inside those lecture recordings. The main advantage of OSOTIS is that most of the video post processing that is necssary for implementing a search is done in a completely automated way. Many other video search systems depend on cost intensive post processing, such as segmenting the videos into short 'learning objects', manually annotating the video segments, etc.
OSOTIS is different:
It makes use of additional information resources such as desktop presentation (e.g. powerpoint or pdf slides or simply desktop recordings) that can be synchronized with the video recording in different ways. If there is only a lecture video without any additional information source, even speech recognition technology is able to provide keywords that can be used for the video annotation. In this way, the video can be automatically segmented and the segmants can be annotated with keyword descriptors. Additionally, if there is no way to determine the content of the video, OSOTIS offers manual annotation and social tagging services to all registered users. Thus, there is always some way to search inside each lecture recording, no matter if additional information resources are available or not.
You just enter a keyword and OSOTIS will display a list of lecture recordings that are related to that keyword. By selecting one of the results, the video will start at exactly that point in time that is directly related to the user query. OSOTIS does not host the video resources on its own server, but offers only links to the original streaming servers (for streaming resources) or origin servers with podcast/videocast recordings. Thus, also all kind of video formats can be maintained, as e.g., real media, mpeg, mp4, flash video, and others.
Up to now, the main part of hosted video lectures is in given in German (and thus being hosted by german speaking universities, as also Austria or Switzerland). But, the number of lecture recordings in English will be increased soon.
Gepostet von Biblionomicon an 11:08 AM Links zu diesem Post

I really have to hurry up, because in reading I'm still 2 books ahead of my reviews. So, after 'Rouge et Noir' I decided to read Arthur Schnitzler's 'Traumnovelle', which b.t.w. formed also the basis for Stanley Kubrick's as 'Eyes wide shut'. I guess I read the book because of the movie, but after reading the book I must confess that I really like the book much more. So, basically it's about that couple living in Vienna. The time is about at the beginning of the 20th century. He's a physician and the novel starts when the two are about to visit a ball (same as in the movie). Home again, she tells him about her dream and an incident that happened during their last holidays. There was a stranger and she was very attracted to him...and if he (the stranger) had said only one word, she would have followed him no mater of the consequences (but of course this didn't happen). He (the physician), somehow, is really shocked by this revelation. Then, in the night, he is called into the house of a dying patient, but as he arrives, the patient has already passed away. When leaving the patient's house again, the daughter of the dead (with tears in her eyes, her fiancé waiting for her in the other room) tells him that she loves him. Very moved, he's running through the streets of Vienna, doesn't want to go home, still thinking of some kind of 'revenge' for the 'imaginary deed' of his wife. He follows a prostitute to her home but leaves her place already before coming to business. In a bar, he meets an old friend who is playing the piano. The friend tells him that he is invited to play piano at some secret (private) party, and that people there are celebrating some kind of secretive and 'orgiastic' carnival. He persuades his friend to play some trick to get him into that party, but to get in he is in need for a mask to disguise his identity. In the middle of the night, he goes to rent a mask at a shop (again another story telling about the shop keeper selling his daughter as a prostitute...). Nevertheless wearing the mask he succeeds in getting into the party, but a strange (attractive and almost nude) woman realizes his presence there and that he is not supposed to be at this place. She warns him, but he does not care. Other people realize that he is a stranger and he is asked for the password that he can't provide. He is supposed to be punished, but the strange woman takes his place and therefore also the punishment for him. The next day, when he got home, he reads about some strange killing of a noble woman taking place in a hotel that very night, and he decides to find out, whether this killing and the 'punishment' of the last night might be connected to each other.....
I won't tell you how it ends - anyway, if you have seen 'Eyes wide shut' for sure you will know. But....it was really some experience to read it and I have enjoyed it very much. Schnitzler leaves many things to your own imagination...and Kubrick for sure invested a lot of it to setting it into scene. But, as for any movie that is based on literature, the movie just shows a special reading of the book with special emphasis on things that the director regarded as being important. Kubrick did some great job....but sorry, I don't like Tom Cruise as an actor (the only movie where I really liked his performace was 'Magnolia'...but the performance of Philip Seymour Hoffman was much more impressive...). Thus, reading the book opens up new possibilities, new ways on how your imagination might put some light into the strange story. I can highly recommend it (and it's rather short..you can make it in just one day).

P.S. you might find some other works of Arthur Schnitzler at Project Gutenberg
Gepostet von Biblionomicon an 10:00 AM Links zu diesem Post