Quite a lot has been written about flickr. Of course it's a great tool combining a web based picture database and a collaborative tagging system and I do like it. Image processing and tagging, creating groups and social networks...really well done. But, from my point of view, what really sucks is flickr's tag based image search. Here, all the negative stuff that can be argued against the use of collaborative tagging systems (CTS) can be found.

Ok, let's start with the general shortcomings of keyword based search engines:
(1) Homonymy: The keyword used to query the search engine can have multiple meanings while being the same word. This means that you will get many non relevant results (bad precision) because their keyword refers to another meaning.
(2) Synonymy: There are other words that have the same meaning as the keyword that you have entered as query string. Thus, you won't get all relevant results (bad recall). This also refers to the fact that flickr is an international platform and the tags being used are of multilangual origin.

Usually, one can try to cope with this polysemic shortcomings by refining the query string -- broadening or narrowing the search results by connecting additional keywords with a boolean operator (AND / OR).
Then, in CTS there are additional problems that originate from the people's way to generate tags.
(3) Tagging: Different kind of tags can be distinguished. A rough classification distinguish between descritional and functional tags. While descriptional tags -- as the name says -- describe the resource being tagged in a general way ( and thus, might be also useful for others), functional tags most times are only relevant for the single user who tagged this resource.
Classic example: A picture of an apple can be tagged as 'apple' (relevant for all users) as well as 'breakfast' (relevant maybe for a fraction of users).
Taken all three arguments together, collaborative tagging systems really have some problems, if they are considered as search engines, because bad precision and recall lead to bad results.

Another point is relevance. Search engines -- as e.g. google -- introduce relevance weights (as e.g. google's pagerank) to consider the importance of the single search results. The search results are ordered according to their relevance. Google's pagerank roughly reflects the fact that a resource can be considered as being important, if many other resources link to that particular resource (in addition also the number of outgoing links and the weight of each single link is considered). So, try to adapt this concept to flickr.... First, a picture doesn't link to other pictures. No big deal, flickr offers the user to choose 'favourites' among all the pictures. In addition there are some statistical indicators, as e.g. page views or an indicator of 'interestingness' as well as the number of comments. Thus, a relevance indicator could be moulded that could be used for a ranking of search results.

Unfortunately, if you try a search in flickr you will get a huge amount of results without any visible order or relevance. (Simply try 'Rome', you will get more than 290.000 results. Of course there are pictures of the city of Rome among the results...but also many other pictures, where the tag 'Rome' has been assigned for other reasons.)
One problem with flickr for sure is that it is not a 'real' CTS. It seems to be focussed on people tagging their 'own' resources and not the resources of others. In addition, the tags being assigned to a resource are considered as being a set and not a list (or bag - where you can see how often a tag has been assigned by how many users). Thus, tag convergence is out of reach. 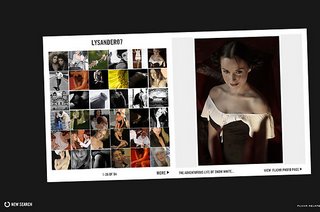 On the other hand, there are some nice tools around. Just try this nice little flickr tagbrowser application. OK, it has the already mentioned shortcomings, but it's a nice little gadget.
Gepostet von Biblionomicon an 10:37 AM

As you probably know, during the last two weeks I had to spent a lot of time in oral examinations about last semester's "web technologies" lecture. Whenever you do examinations, you might get some insight on what the students did understand and what they kept in mind from your lectures. Sometimes you wonder and ask yourself "What the f.... were they doing while sitting in your lecture??" You try to make it simple and give some hints on what is important and what is not. But I guess, sometimes you just make it too simple for them...and thus, they underrate the whole thing and you'll get the receipt during the exam...
Anyway...sometimes the students seem to have some 'cloak-and-dagger' sources of information...as I had to experience last tuesday. I was just starting the exam with a question about search engine types, which finally lead to the (not so important) topic of 'meta search engines'. Usually, I ask how meta search engines are working and try to get quickly to some more interesting topics. On tuesday I received a strange answer ... and the funny thing is that I was told the same queer answer already by another student the week before:
"Meta search engines have their name because they are search engines that analyse the meta-tags in the header of HTML documents..."
Okay...stunned I was looking at my assessor and the assessor immediately stopped writing his protocol also having a stunned expression in his face. "From where did you get that?", I was asking the student. But he explained to me that this fact is just obvious and everybody knows...
Sometimes you really wonder what they are doing while sitting in your lecture...
If a third student will come up with this answer I'll have to cover up the source of this "information".
(At least - as we have more friendly temperatures now - they are not wearing muscle-shirts and flip-flops... :-)
Gepostet von Biblionomicon an 9:14 AM

It is important to state the dependencies between the three identified characteristcs (logical, conceptual, and referential) that are common to any kind of document despite their heterogeneity.

As e.g., let's consider a large text document (textbook). The document's index can be considered to be part of the conceptual document structure, while the linear text flow with its hierarchical structure defines a part of the logical document structure. The index of a textbook can be considered as being of good quality, if an index entry in the first place refers to the location, where the concept denoted by that index entry is defined and subsequently to the other locations, where it is used. Thus, we distinguish between concept definition and concept usage (refering to the logical structure) for the document index (conceptual structure). Obviously, both are dependent on each other. The same holds for the bibliographic references (referential structure) together with the table of contents (logical structure) and the document index.

We claim that these dependencies within a document have to be made explicit. As additional document annotation these dependencies can help to represent document semantics without the necessity to really "understand" the content of the document. Acting in concert with external (user and/or author defined annotations) the document dependency structure is able to facilitate cross annotation reasoning that is a prerequisite for the semantic web.
Gepostet von Biblionomicon an 11:53 AM

An Integrated View on Document Annotation...

Did you realize that documents - no matter what type of document, as e. g., text documents, graphic documents, or videos - can be all subsumed within an abstract view?

We can define a document to be a string of addressable tokens. Some of these tokens are special tokens, the so called tags. In difference to all the other tokens that can be regarded as the document content, tags have a special function: they mark up single tokens or groups of tokens (document units) to be interpreted in a special syntactic or semantic way. On the other hand, tags can also be interpreted as document annotation, i.e. the document can be regarded as an unformatted string of tokens, while the tag (annotation) defines the document structure. We distinguish between different types of tags:
Thus, within a document, we can distinguish between the logical structure, the referential structure, and the conceptual structure that are each dependend on each other. Additionally, we distinguish between tags that are supplied by the author (e.g. structural tags) and tags provided by the user (e.g. "tags", annotations, reviews, e.a.).

We can apply this view also on other types of documents, as e.g., video documents: The smallest unit - the tokens - of a video document is a single pixel. Considering the logical structure, pixels can be subsumed to blocks, which form macro blocks, which can be subsumed to slices, which together constitute a frame (picture). In difference to a text document, a video document also depends on time. Thus, we can identify groups of pictures (gop) that form the entire video sequence. In mpeg-4 we even have the possibility to identify objects within a picture that can be subsumed within a scene. With mpeg-7 also conceptual and referential information can be added to the video by adding metadata about the author or about objects or scenes within the video.
Gepostet von Biblionomicon an 11:15 AM

Summer seems to take a little break - at least the temperatures are below the 30s - and immediately you start to miss it. Have you noticed that most people don't seem to realize that the temperatures have dropped. They seem to pretend we're still in the tropics...at least considering their style of clothing.
Yesterday I had a student in oral examination wearing only a tight muscle-shirt...you could really see the sweat of anxiety being cooled down by the air condition dripping from his naked skin...I wonder what will be next to be seen, if the temperatures start to rise again. Bare chest, bare foot, or even.....I don't want to imagine?!
But, this reminds me of the "flipflop dilemma". Yes, men in flipflops...not those flipflops made of transistors being basic electronic components. For decades those electronic flipflops were the only flipflops to be associated with the male (geek). Not at all ... I'm talking about those bathing shoes called flipflops. The have their name because of the sound they produce while walking. Yesterday I read a flaming article about men and flipflops in spiegel online. Nice quote: "Shoes that are able to say their name, being worn by men that are not able to spell the word style...". Don't get me wrong. Of course you can wear whatever you like, but please consider the occasion!
During the last weeks really it was rather hot. But the office is air conditioned (you will freeze) and an examination is an examination...and not a seaside holiday pool game.
Gepostet von Biblionomicon an 9:36 AM