Artifact, i.e. an error or misrepresentation introduced by a technique and/or technology. Most obvious are artifacts in lossy image compression techniques such as, e.g. the jpeg compression algorithm. For jpeg, the entire image is divided into 8x8 pixel squares (of course for all three color channels... but not RGB. For jpeg the RGB picture is first transposed into the YCrCb color space, i.e. Y for luminance and Cr, Cb for chrominance being subdivided into red and blue. BTW, there is also subsampling, i.e. luminance is sampled with higher accuracy than chrominance w.r.t the human sensory perceiption). Then these 8x8 squares of intensity values are transformed into the frequency domain via a discrete cosine transformation. Up to now, no artefacts, no data loss.....

But, next comes a quantification algorithm that rounds the frequency values within the 8x8 squares. If this is done with high accuracy, often one doesn't even notice it within the picture. But, increasing quantification also results in higher data compression, which also results in more data loss, which creates ... artifacts. You can see the typical jpeg raster effect, whenever using high jpeg compression.Here's a cool animation of an image being jpeg compressed 600 times (in a 20 second short movie). The simple algorithm goes:

Open the last saved jpeg image
Save it as a new jpeg image with slightly more compression
Repeat 600 times.

Generation Loss from hadto on Vimeo.
Gepostet von Biblionomicon an 11:51 AM

So, how was this year's CeBIT computer fair? The media have been rather pessimistic beforehand. 25% less exhibitors, 20% less visitors, but despite the worlwide economic crisis you'll find confidence everywhere ... at least now.

This year, I visited CeBIT only for a single day as exhibitor as well as a visitor. On friday, March 6th 2009, there was 'startup day' at the HPI booth in hall 9, B.10., and we presented our video search engine yovisto (well, it was almost only Jörg who did the presentation, while I was playing 'visitor'...). As every other year, for me hall 9, the 'future parc', is the most interesting hall of all 26 (!) halls. BTW, did you now that the Hannover fair area is the largest in the world? In hall 9 you could find the latest research of universities and research institutions (as well as some government and public administration...). 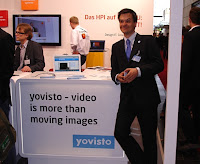 One thing that was pretty obvious was that hall 9 was not as crowded with exhibitors as the years before (at least in the rear areas this could be realized pretty heavily). I also was a little bit disappointed about our former booth at the joint exhibition stand of the universities Thüringen, Sachsen, and Sachsen-Anhalt (=Mitteldeutschland), because there was nothing really interesting to see, and most exhibitors were busily sitting in front of their computer screens.....presenting their 'backside' to the visitors and avoiding contact...not really inviting at all. No wonder, if they don't make it in the run for excellence... 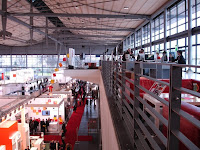 But, on the other hand, I really liked the exhibition stands of the Fraunhofergesellschaft and the THESEUS research programme. Esp., at THESEUS (user scenario CONTENTUS) they demonstrated the workflow for digitalization, restauration, and indexing audiovisual media (...just my subject). While digitalization and restauration work pretty well, the indexing capabilities are still rather limited. You might search for 'similar' motives, but identifying individual persons is still subject to ongoing research. 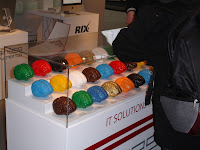 After all, I was really happy to stay just for one day. Some of our co-workers had to stay for the entire week (my sincere condolences!). Was it worth while? For one single day, of course yes it was!

P.S. Alas, there really was a Latvian company that showed 'brains' in various colors.... ;-)
Gepostet von Biblionomicon an 1:04 PM